Christmas On A Cruise Ship - Aboard the Westerdam, Holland America Line

Many think that boarding a Christmas cruise takes them away from long held traditions and customs.  But on a recent Holland America Line cruise to Mexico, I discovered that isn't always the case.  Sure, cruising an ocean can't duplicate years of holiday memories, but it can create new ones and might be the start of a new tradition. 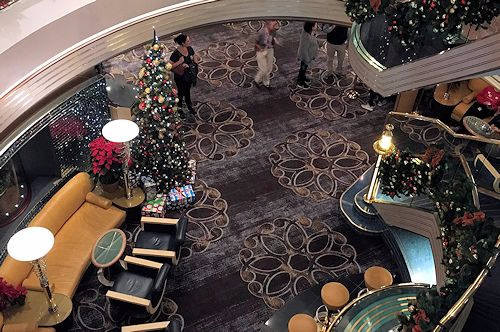 At Christmastime on a cruise ship you will definitely see some decorations.  On the Westerdam several of the public spaces were very festive and most of the ship had some kind of holiday adornments.  The central lobby of the ship, known as The Atrium, had a nice tree and poinsettias.  It was often surrounded by groups having photos taken by the ship's photographer. 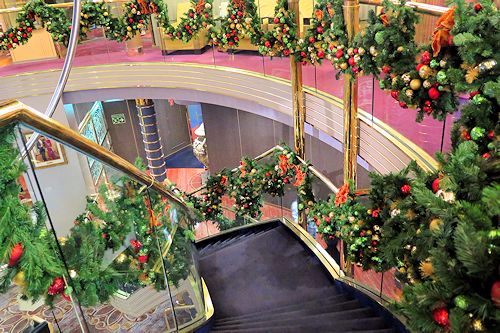 The stairs between decks were decorated, as were the railings on the balconies on each level of the atrium.  Since The Atrium of the Westerdam was a central traffic area, it gave plenty of opportunities for viewing these ornaments. 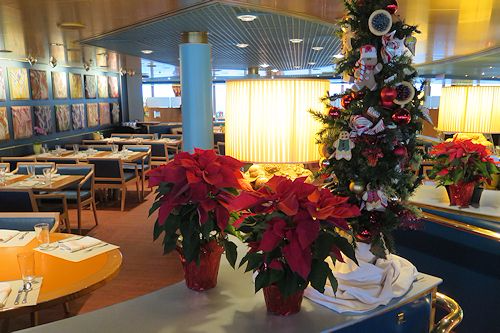 Holiday flowers, plants, and small Christmas trees were located around the ship, like these in the Lido Restaurant/Buffet.  You can read more about the Westerdam HERE. 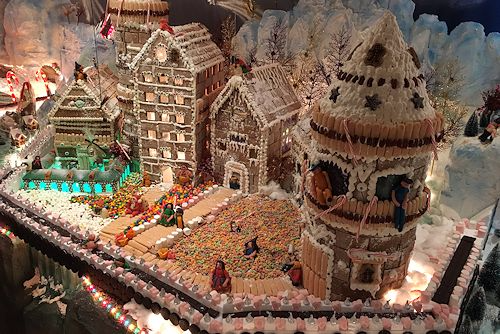 On the Westerdam, a portion of one of the lounges was converted into a beautiful gingerbread town depicting landmarks from around the world.  The Holland American Line kitchen staff outdid themselves on this yummy display! During this Mexico cruise, departing Long Beach California, Christmas Eve was the first evening at sea.  It featured a Vigil Mass, Hanukkah Service, Midnight Mass, and Midnight Interdenominational Services.  In the lounges, the entertainers offered up holiday favorites.  The entertainment staff also spent the evening singing carols in various locations around the ship.  The crew of the Westerdam presented a Christmas Concert featuring traditional songs from their home countries. 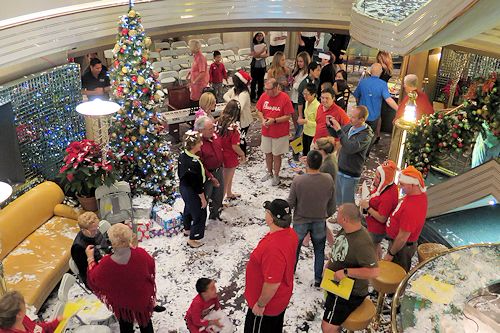 December 25th was a day at sea as we headed toward Mexico's Cabo San Lucas.  It had snowed confetti overnight in The Atrium, and everyone was waiting for the arrival of Santa Claus.  The ship's Daily Navigator newsletter said we should expect the arrival of a special visitor that morning in the main theater, the Vista Lounge. 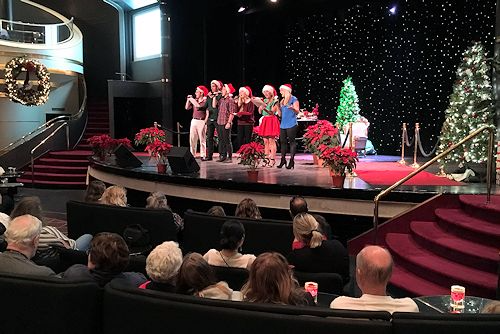 On Christmas Morning, the ship's entertainers took to the Vista Lounge stage and sang carols as passengers awaited the arrival of Santa.  The Captain then made a ship-wide announcement that something unusual was spotted in the water off the port side of the ship.  A boat crew was dispatched to investigate.  Sure enough, they returned with Santa Claus and a few of his helpers.  A video screen in the lounge showed Santa as he moved through the ship, being distracted at every turn.  First it was the buffet, then the casino, then the salon and spa.  His helpers would constantly remind him he had children waiting. 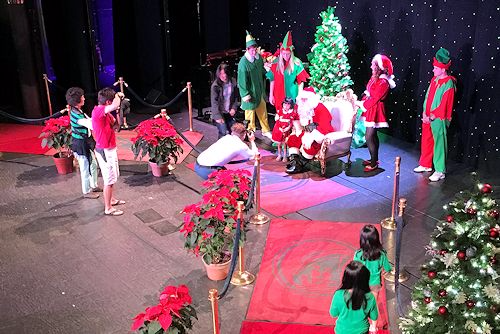 Santa found his way to the Vista Lounge stage and was greeted by shouts of glee from children of all ages.  He took to the stage as the ship's staff passed out cookies to the watching audience. 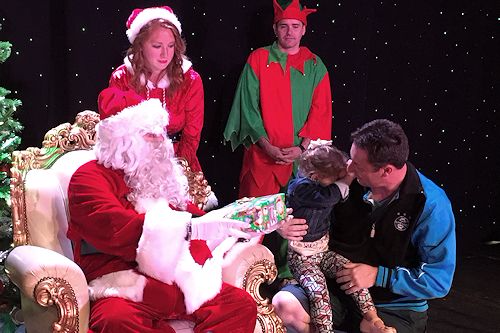 A line of excited children quickly formed, and the jolly old man began passing out wrapped packages.  In traditional fashion, most of the kids were excited to meet Santa on Christmas, but others were a bit confused and shy. 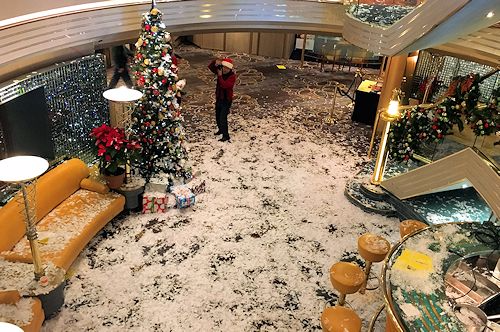 It was a busy morning on the Westerdam, and someone had a lot of cleaning up to do in The Atrium.  Over the next few days the decorations slowly disappeared, and the ship took on the normal, everyday appearance.  A few other observations of this holiday cruise: As would be expected, lots of families were on-board, and the ship was full.  Wikipedia says the capacity is 1848 passengers; we had 2065.  I'm sure most of this was extra kids staying with parents.  At times the ship felt crowded, but you could almost always find a quiet spot to sit and read or have a drink. 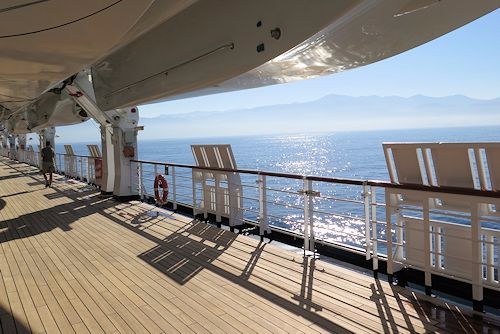 Mexico is a beautiful country, and the Western coast is a great cruise destination.  During this seven day cruise, we visited Cabo San Lucas, Puerto Vallarta and Mazatlan.  We traveled 2169 NM with an average speed of appx. 16 knots.  You can listen to a podcast about this Christmas Cruise HERE.

(NOTE: Four months after this cruise, the Westerdam entered dry-dock for routine maintenance and some upgrades.  It was nice to see that Holland America Line is keeping this already beautiful ship in tip-top shape.)

Oasis Of The Seas arrives in Florida

Cruise Lines Evaluated by Friends Of The Earth

Friends Of The Earth, (who are they?), has released an environmental report card for cruise lines. The ranking was based on air and water pollution. You can see the chart here. CLIA, the Cruise Line International Association, suggests that industry ships have made major improvements with discharged water being cleaner than what many municipal water treatment release into local environments.

It also appears that most ships failed due to one item, the lack of shore power plug-ins. This feature allows ships to shut down or reduce their onboard generators usage when the ship is in port, reducing air pollution. The problem is that few ports offer this type of connection. I suspect if dock side power was available most cruise lines would begin using it.