U.S. Airlines on-time arrivals have improved. A reduced number of flights due to less people traveling may be resulting in airport increased airport efficiency. Every month this year, the airlines improved their on-time arrival performance, except March. The Transportation Department reported that 80.5% of the flights operated by the 19 largest airlines arrived on time in May, compared to 79% during the same time last year. Another thought reported by an aviation consultant is that airlines have lengthened the estimated flight times, making it easier to have an on time arrival. The best May arrival time average is Hawaiian Airlines at 90.3%, the worst is Comair at 71%, a regional carrier owned by Delta. One has to consider the routes of the carriers too; some being more predictable than others. The Transportation Department also noted improvements in tarmac delays, mishandled baggage, customer complaints and cancellations.

The plane headed for the crash landing and the passengers braced for their lives. Pilot "Skully" Sullenberger skillfully landed the US Airways aircraft and all 150 passengers and 5 crew safely departed. Minutes after the "miracle" landing, one passenger wanted to get his briefcase off the plane before it sunk. All his documents, personal and business, were on the laptop and he hadn't backed up.

It shouldn't take surviving a plane crash to motivate you to back up your data. However, so many us of put it off until something catastrophic happens, like our laptop crashing, or getting lost or stolen. The passenger who hadn't backed up was out of luck, but another passenger using an on-line back up service had his laptop completely restored within four days.

The "out of luck" passenger lost both computers he had on board, about 250 gigabytes of data from his employer Computer Associates. He had been good about backing up his data from sharing the contents of one hard drive to another. This trip was unusually because he was traveling with both machines due to a business assignment. He lost everything.

Fellow passenger Paul Jorgensen had a better story to tell. He had used a service called Mozy that his employer, Epocrates, provides to back up the night before. The software runs in the background and automatically backs up data while on the internet. He is grateful for the on-line service that helped him retrieve all his data simply and quickly.

The two key players in online back up services are Mozy and Carbonite and, offering peace of mind through online automated back up services for personal and business users. The basic principle behind backing up is to protect data from disasters and the best security is to have multiple versions of the data stored in an alternate location. Most businesses have systems in place; however, vulnerabilities in the processes still exist. Remote backup or off-site data backup allows users to back up data to a remote, off-site location using existing internet bandwidth. Additionally, this less cumbersome approach allows for quicker restoration of data.

The service that booth Mozy and Carbonite offer is software that back ups your files to their servers in the background when you are connected to the internet. Mozy offers unlimited back up for $4.95 per month for home users. For commercial use, see their web site, Mozy Pro. 2 GB of free online back is the promotion they are featuring. The process is like insurance for your data; stored, secured and encrypted in a remote location for safe keeping.

Carbonite Online Backup offers one year unlimited backup for $54.95 for unlimited backup and boasts important files can be recovered anytime, anywhere. The software runs in the background, backing up files as you work. The encryption service protects your data and their web site offers a 15 day free trial.

Passenger Paul Jorgensen's positive experience with Mozy was exceptional because he had all his data back on his new machine within four days. He had no excuse not to get back to work; even after a surviving a plane crash on the Hudson River. In addition to catastrophic plane crashes that destroy your machine, less dramatic incidents like accidental deletions, drive failure, theft and breakage could set you back. Therefore, an on line back up service like Mozy or Carbonite may be a good choice. 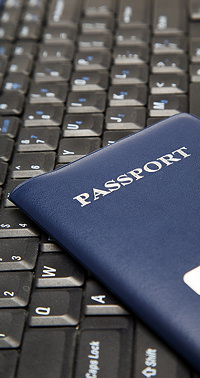 The Transportation Security Administration (TSA) is implementing a new safety measure for travelers. The Secure Flight Program will require airline passengers to give their name, gender and birth date when making a flight reservation to determine if there is a match to the No Fly or Selectee lists. By providing the additional information, Secure Flight can effectively help prevent misidentification of passengers who have similar names to individuals on the watch list and be more effective in screening for airline safety.

Secure Flight shifts pre-departure watch list responsibilities from the airlines to TSA and carries out a key recommendation of the 9/11 commission. When a passenger makes a reservation with an airline, travel agent or online company, the new data will be required. TSA is sensitive to privacy issues. Processes are still being worked out for a smooth transition from the airlines to the government agency.

If a passenger wants to book a flight 72 hours in advance, the name (should match the government issued ID he passenger intends to present at the airport), gender and birth date will be required for cross referencing by TSA. If the fight is made within the last 72 hours, TSA will require additional information at the time of the reservation. During the 72 hour window, TSA will have the ability to stop the issuance of a boarding pass until further screenings.

The Secure Program is being rolled out in stages; beginning with domestic flights first, then expanding to international flights to and from the U.S. The ATS encourages visitors to the U.S. and hopes this new program will facilitate approachable travel to the U.S. If a traveler has a complaint about the manner they were treated by a government program to promote safe travel, there is a one stop web site to voice concerns. There's a big green button: File a Complaint.

The name of the web site is: Department of Homeland Security's Traveler Redress Inquiry Program (www.dhs.gov/trip). It can also be used as the gateway to address watch list misidentification issues. Where travelers believe they have faced screening problems at ports of entry or situations where travelers believe they have been unfairly or incorrectly delayed, denied boarding or identified for additional screening at our nation's transportation hubs. Secure Flight plans to use this web site to prevent future misidentification issues for passenger who may have similar names to individuals on the watch list.