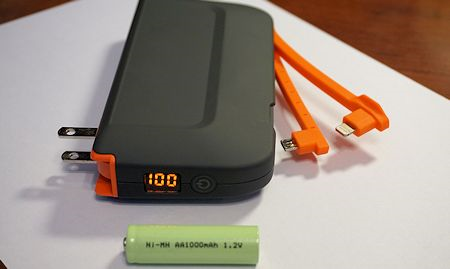 My first thought of the Ventev PowerCell 10000+ was "This thing is heavy"...  Then I realized that it replaces three must have items in my carry-on bag.  It would replace my transformer block that has high and low amperage USB outlets.  No more need to carry two cables, a USB to Lightning for my iPad, and a USB to Micro USB for my camera and other gadgets.  And I can leave my Anker 10000 mAh battery at home. 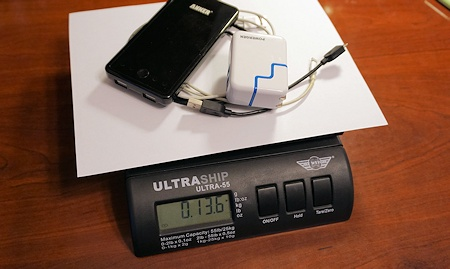 Here you can see all the normal power/charging stuff I take need to carry.  It weighs in at 13.6 ounces.  The Ventev PowerCell 10000+, that provides all the same functionality weighs only 10.6 ounces.  Doesn't sound like much of a difference, but every little bit adds up when you are on the road.  Here are some output specs: Lightning cable 2.4A / Micro USB 1.8A / USB outlet 5V, 1.0A.  Not shown in my photos is the standard USB outlet on the back. 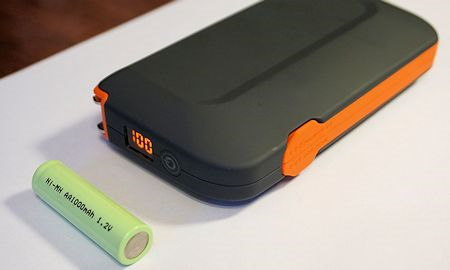 Here you can see the size of the unit when compared to a AA battery.  It isn't small but if I could measure the volume of my old power gear I'm sure it would come in much larger than this combo device.  Just like the AC plug the two power cables store nicely on the side of the unit when not in use.  Note that the Lightning charge cable may not work with some iPhone or iPad cases due to its size.  When plugged into an AC outlet for charging the PowerCell 1000+ came back to 100% charge just as fast as any other battery of this size I've used in the past. 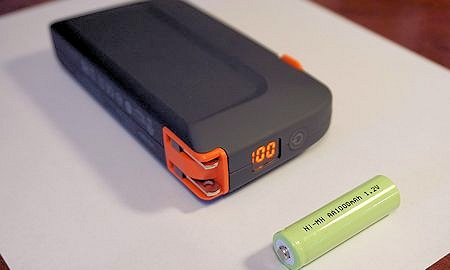 A digital display is provided to see the current state of the batter.  A power button beside the display turns on the charging feature.  The unit did a good job of charging my devices.  With the battery at 100% charge I plugged in my iPad Mini 4 and a HTC One Android phone for charging.  My iPad was at 38% and my phone at  48%  and I went to bed.  I did NOT TURN OFF my iPad or Phone, or place them in airplane mode for fastest charging.  In the morning I found the iPad and phone fully charged and the remaining battery charge at 44%.  Note:  If the PowerCell 10000+ had been plugged into an AC outlet it is designed to first charge the devices that are plugged in and then recharge it's internal battery. 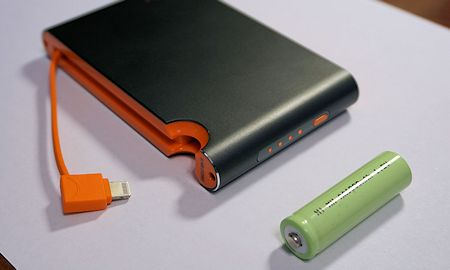 The folks at Ventev also sent me a Powercell 6000c for review.   Due to the smaller 6000mAh battery this portable charger is much smaller and lighter than the previous device.  When you first pick it up in its retail packaging it feels very heavy due to the plastic package but the unit weighs only 7 ounces.  Unlike the soft touch rubber feel of the 10000+ above this one has a metal case.  A four LED display shows it's charge level.   For my personal needs this 6000 mAh is better than my old, larger 10,000 mAh battery pack. 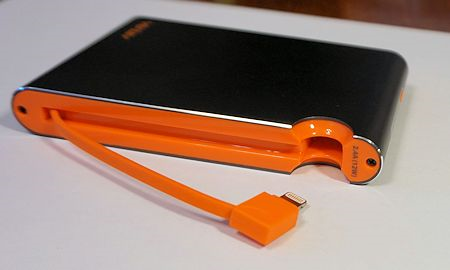 The 6000c came with an integrated Apple Lightning connector and a 5v 2.4A (12w) output specification.  The unit is also available with a Mirco USB connector.  The cable on this connector is much more flexible than on the 10000+ above.  Note that this Lightning charge cable may not fit some iPhones or iPads while in their cases.   This charger works with my iPad Mini case, but the 1000+ above has a larger plug and would not fit. 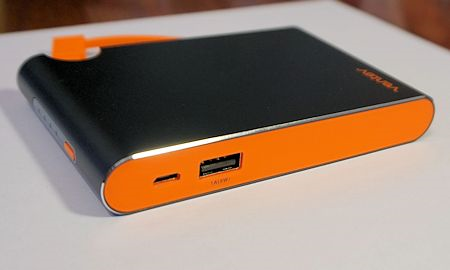 It charged at about the same rate as other batteries I have of this type.  You will see above that next to the Micro USB charging port is a USB outlet with a rating of 5V, 1A(5w).  In my test the Powercell 6000c charged my iPad Mini from 25% back to full charge overnight with appx 25% power remaining in the charger.  Note that my WiFi only iPad Mini was turned on while it was charging.  For faster charging turn your device off or place it in airplane mode.

Cons:  Charging cables may not fit your Apple device while in a case.