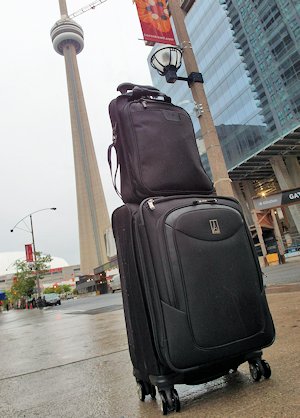 At the Travel Goods Show in Las Vegas in early 2013 I ran into a manager from TravelPro talking up their new Platinum Magna Carry-On Rollaboard line of suitcases.  However at this event dozens of luggage makers were doing the same thing: doing their best to stand out among the rest.

One of the guys at TravelPro caught my attention when he mentioned that their Platinum Magna bags featured four patent-pending features.  The fact that anything really new could be developed for a suitcase seemed hard to believe.  I've seen this with luggage before.  Lots of hype on a product that never makes it to stores in the USA.

A few months later an email announced that a Platinum Magna Carry-On was on its way.  At first glance it is a typical TravelPro bag: well made and showing the extra attention to detail that they are known for in their luxury product categories.

An eleven-day trip to Toronto was just around the corner and I figured I would give this carry-on a test.  Could I make it my only piece of luggage for this trip?  I was going to a convention of travel writers and then do a feature article; 7 Hotels In 7 Days: Toronto.  During the trip I would be staying at eight different hotels during the 11 days.  The majority were within walking distance of each other so I knew that I would be giving the wheels on this new bag a real workout. 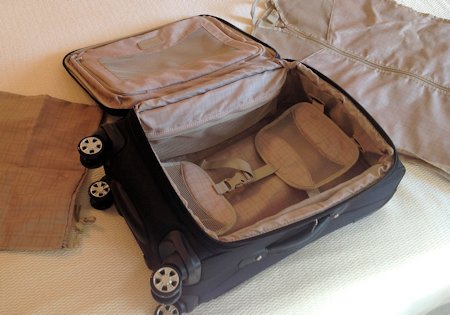 The carry-on came with a small zippered pouch that I tossed aside.  They included a hanging bag which I loaded with 4 shirts on hangers.  The interior of the bag has two zippered areas that  have mesh areas allowing you to easily see what you packed in those pockets.  A compression system/strap allows you to layer the bag's contents or secure your stuff in case you don't fully pack the bag.

This is not one of the fancy features that was originally pitched to me as something new but I sure was impressed with the hanging bag that TravelPro included with this carry-on.  My shirts came out looking great.  I think part of the reason was the foam-covered rod that guides the tri-folding feature of the bag.  Additional info can be found on the TravelPro website. 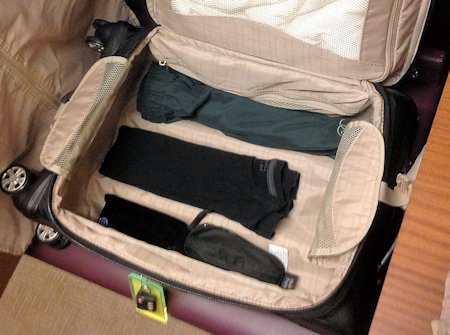 Like most rolling bags, expect to lose some interior space if the handle mechanism is inside of the bag as it is in this carry-on roll-aboard.  This calls for a little "defensive" packing, as you see above, but it required compromise with this type of luggage.  This bag meets the majority of carry-on size requirements for domestic airlines (22x14x9) when it is not expanded.  You also lose some space due to the spinner wheel design of these types of bags when compared to a two wheeled pull along. 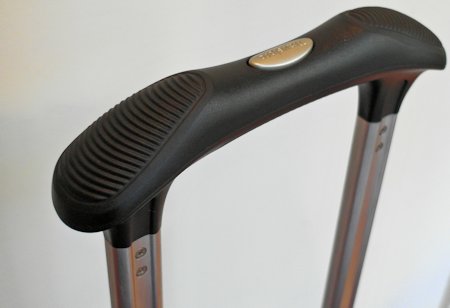 Now let's get to the four big patent-pending features the guy at TravePro told me about.  This is Number One: the Contour Grip handle.  At first it may not seem like much, but with a four-wheeled spinner style roller bag this is an important feature.  The unique handle fits very well into the palm of your hand allowing you to push the bag easily.  The second item you will find on this bag is the PowerScope rails on the handle.  They are sturdy and provide stable control of the bag. 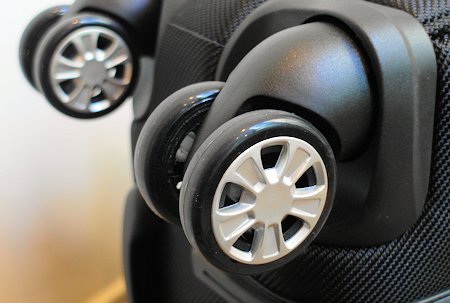 This may be the best feature of this new bag from TravelPro.  The MagnaTrac spinner wheels!  The bracket that holds these wheels has magnets that "urge" the wheels to stay straight and not steer off to the side.  It is very easily to change direction but after you are done with a turn the wheels want to go back to a straight track.  See the magnets in action in my YouTube video below.

You can see the action of the magnets in the YouTube video.  After being moved from the centered position they want to return. 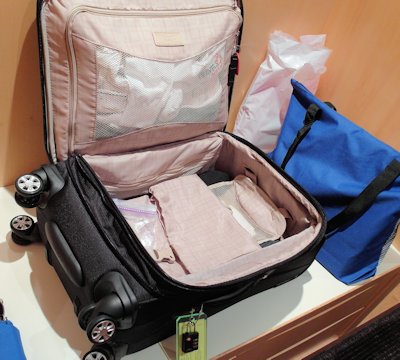 The fourth and final feature that was so very handy can't be seen in this picture.  I would have had to strip the bag down to it's bare frame to show you what TravelPro calls the high tech plastic Duraframe structure of the inside of this bag.  This lightweight frame is sturdy and strong for it's size and weight.

I would say the biggest PROS for this Platinum Magna Carry-On Expandable bag are its spinner design and its minimal weight.  If you like spinner bags you will like the wheels, handle and grip on this bag.  Since this is a carry-on every ounce of weight that can be removed from the bag is a blessing when you need to lift it above your head and stow it on-board a plane.

CONS have to do more with the "spinner" type of bag than this specific piece of luggage.  Due to the extra spinner wheels you lose some interior packing space.

You can get a bag just like this one at Amazon.com at a competitive price. This 22-inch carry-on bag was all I needed for my eleven-day Toronto trip.  I wore my suit jacket on the plane and expanded the bag when I arrived making it a little easier to live out of.  I also had to do some hand laundry during my stay.

The quality is top notch and has luxury/upscale touches while the the eight MagnaTrac wheels make it very easy to maneuver on smooth surfaces.  On rough terrain I used it as a traditional pull along without any issues.