Living History in the Luxurious Jefferson Hotel of Richmond Virginia 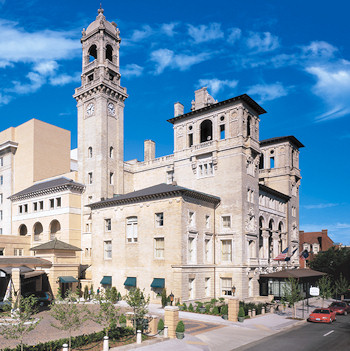 Right in the heart of downtown Richmond, Virginia, is a stunning 18th century luxury hotel called The Jefferson. Designed by the team which also built the New York public library, this award-winning structure blends Italian Renaissance with Beaux Arts architectural style, with its ornate balconies, porticos, and Italian clock tower. 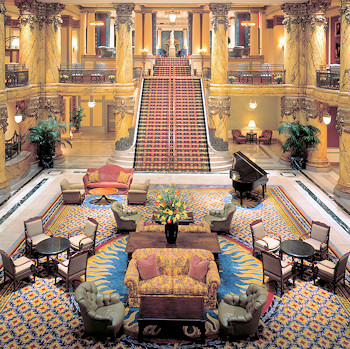 Faux-marble columns can be seen in the original lobby which leads to the hotels Grand Staircase, reportedly the inspiration in Margarett Mitchell’s Gone With the Wind, and the site of hundreds of wedding pictorials through the years. From the reception area of the Palm Court lobby, the life-sized marble statue of Thomas Jefferson can be seen, highlighted by sunlight coming through a stained-glass dome made of Tiffany glass. 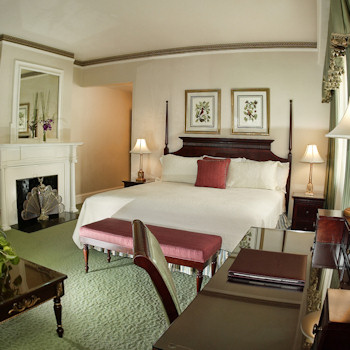 The Jefferson has 262 guestrooms and suites, each traditionally designed in one of the 57 different residential styles used by architectural firm Carrère and Hastings. All rooms have high ceilings and tall windows, decorations of 18th century reproductions, artwork, and plush carpeting.  Hotel Website.

This rich residential look is combined with modern conveniences too, like Egyptian cotton linens in ultra-soft featherbeds, free wireless Internet access, an in-room safe, a cable TV, a mini-bar, and dual-line telephones. The marbled bathrooms are as luxurious, with its Molton Brown bath supplies and lighted mirrors. 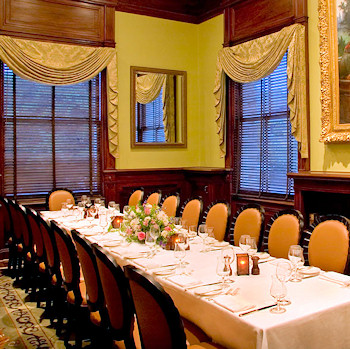 From the first time it opened in 1895 up to present, The Jefferson has hosted hundreds of weddings. Countless brides have had their pictures taken in the Grand Staircase. The hotel can accommodate 500 persons for the reception, and there are wedding consultants that can help the couple iron out their wedding details. The hotel also provides a special wedding cake, butler service, florist and photography service, bands, and even horse-drawn carriages for the bride to arrive in style.

Meetings and conventions are held at The Jefferson too. It has more than 26,000 square feet of meeting space, including the Grand Ballroom, the Flemish Room, the five President's Hallway breakout rooms and the Washington Boardroom.  Learn more about Richmond. 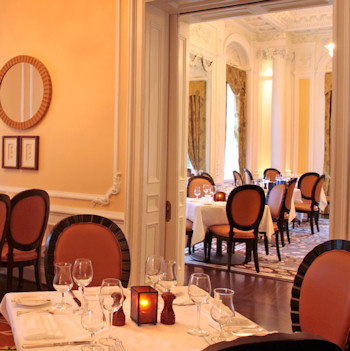 The Jefferson has one of the best restaurants in the US, the Lemaire, which had been named after Etienne Lemaire, Thomas Jefferson’s maitre d’hotel during his reign as president. With its present award-winning Chef Walter Bundy, Lemaire offers a culinary experience featuring Virginia-grown ingredients. Sunday brunches can be had by guests on the Rotunda, and afternoon tea is served Thursday to Sunday around Jefferson’s statue. T.J. is another highly touted restaurant for its Mediterranean and Asian-inspired meals. Though more relaxed than the Lemaire, it doesn’t lack in terms of its variety of offerings. It also has a range of choices of wines served by the glass and premium cigars. 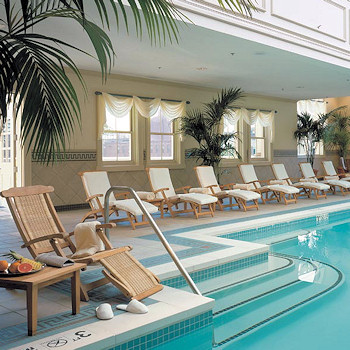 Among the numerous things that guests appreciate in their stay at The Jefferson is the amenities and the services that the hotel extends its guests. It has a swimming pool inside, free transportation to downtown Richmond, a business center, a gift shop, a florist, and a full-service fitness center. There is a variety of hair and skin pampering services, too, as well as free classes at the YMCA across the hotel.

The Jefferson is pet-friendly, and guests with children can also request babysitting services as well as a crib inside the room. There is also the highly-appreciated evening turndown service; according to some guests, nothing beat the experience of going back to the hotel at night and finding everything in place, with soft, classical music playing in the background.

The Jefferson Hotel has been called the epitome of southern elegance, and with its Mobil Five Star and AAA Five Diamond Hotel rating, this luxurious, historical hotel certainly lives up to its reputation.