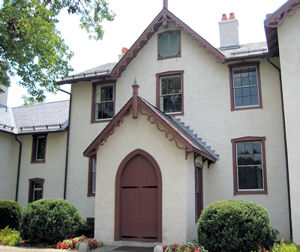 On hot muggy days during the 1860's President Abraham Lincoln headed 3 miles north of the White House to a hilltop Gothic Revival "cottage" retreat.  This 34 room cottage is now open to the public after a $15 million, 7 year long rehab.

Built in 1842 as a private home it was later used by several Presidents, it was last visited by President Lincoln the day before his assassination in 1865.  The cottage doesn't have an extensive furniture collection, this is not an major historic display, the nine rooms that have been open are a bit sparse.